The Illinois eDream Institute is dedicated to promoting arts that are conceived, created, and conveyed through digital technologies
Advanced Visualization Lab
Centrality of Advanced Digitally ENabled Science
Main Menu
about

We draw upon the University of Illinois's strength as a leader in science and engineering as well as its internationally recognized faculty and programs in the arts, humanities, and social sciences to reimagine creative productions, technologies, expressions and their potential for positive impact on our communities and cultures.

We bring together artists, scholars, and technical innovators from many disciplines, diverse perspectives to realize the dream of arts futures in present practice. We reach out to the next generation of digital media artists and media-talented knowledge workers to prepare them for a world that exponentially reinvents itself. 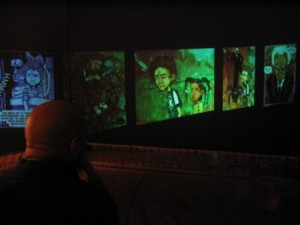 eDream was formed in January 2009, in the afterglow of the Beijing Summer Olympics opening ceremony, which astonished the world with its fusion of arts, media, and technology. The Institute captures the energy of the twenty-first century Information Revolution, a historic moment when the arts, sciences, humanities, and engineering are converging to create digital arts media, and when these digital arts media are transforming the ways in which we discover, invent, record, advocate, share, and express ourselves across the globe. Arts that are composed with, comprised by, expressed through technology promise to play an important role in the evolution of human culture, from helping to preserve our heritage to providing new means of sharing creative insights and experiences.

At this time, creativity is a critical component in strategic university planning as the intersection of art, science, and technology are synergizing to drive the "creative industries". The creative industries (e.g., movie making, gaming, design, music, internet, television, architecture, and advanced visualization) produce major economic opportunity wherever they thrive. Digital arts media now dominate the creative industries, accounting for billions of dollars in international employment and economic growth, with expected future increases [National Research Council (2003), “Beyond Productivity: Information Technology, Innovation, and Creativity,” Washington D.C.: National Academies Press]. An international government report reveals that the creative industries are not only an essential contributor to our domestic economy, but they also generate a huge global economic impact:

Forming an international center for envisioning and practicing the emerging digital arts makes sense at the University of Illinois. Declared the "most wired" U.S. university by PC Magazine in October 2008, the University of Illinois is a recognized international leader in advanced computational research and technical innovation and education. Key contributors to this strength are three eDream affiliates: The National Center for Supercomputing Applications—especially its Institute for Advanced Computing Applications and Technologies (IACAT) Computing and Creativity research theme (led by Mike Ross, Donna Cox, and Guy Garnett); its pioneering Advanced Visualization Laboratory (directed by Donna Cox), which provides advanced visualizations across many fields, from astrophysical and atmospheric science to visionary theater to cultural heritage and preservation; and the Cultural Computing Group (led by Guy Garnett), whose research explores multimodality in media, interactivity, virtual worlds, and creative technologies in performance. The University of Illinois is also home to a rich arts scene, with which eDream also shares close ties: the Krannert Center for the Performing Arts (directed by Mike Ross); the Krannert Art Museum; and a nationally recognized, vibrant College of Fine and Applied Arts.

The University had already invested successfully in the Seedbed Initiative for Transdomain Creativity: Exploring the Human Experience Through Art and Technology (2002-2008), a cross-campus and cross-disciplinary project incubator (led by Mike Ross, Guy Garnett, and Allison Clark) that provided "a comprehensive and flexible framework for the exploration of technology-enhanced art and aesthetic experience," allowing the "creation of new work and new forms of work in new ways," and also serving "to elevate the discourse of ideas surrounding the creation and experience of art." eDream's strategic institutional framework leverages such significant and already established university assets, investments, and entrepreneurship to make significant contributions to this new field's vision and practice—especially in its most experimentally and aesthetically-oriented, radically transdomain, publically engaged, and technologically innovative forms. 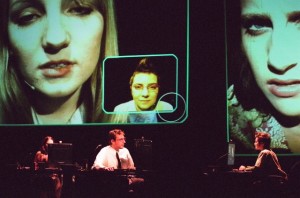 The arts and humanities, no less than engineering and the sciences, must accept the challenge posed by University of Illinois Chancellor Richard Herman in 2004 to "become innovative, agile risk-takers who anticipate and lead transformative developments and reallocate resources to create novel multidisciplinary venues for research and education" [Oct. 7, Inside Illinois]. eDream answers that challenge, promising to bring distinction to the University through providing an important, competitive advantage to our faculty and students and making a major contribution to the emerging field of digital arts media.