In Prairie Futures, we tell the story of women working in digital arts media who made essential contributions to the major global technological revolution that started in the Midwest around 1985, helping to catalyze what we now think of as the Information Age.  This revolution includes seminal events at the University of Illinois and in Chicago, converging at an intersection in social feminist change, advanced academic technologies, and the Chicago art scene.  Digital gaming, virtual reality, supercomputing graphics, and internet browser-based art all emerged from this convergence. 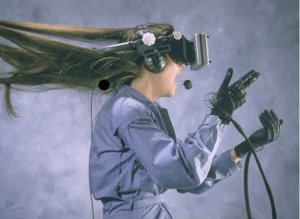 We mark 1985 through 1991 as a threshold period of technological progress on the prairie, with a surge in innovation from then onward.  In national terms, for example, 1992 was a year when 3D graphics in games began to enter the mainstream (e.g., a University of Illinois at Urbana-Champaign alumnus co-developed Mortal Kombat), while in 1994 Microsoft débuted at SIGGRAPH (the ACM Special Interest Group in Graphic Arts continues to be a major meeting in the field).  In Midwestern terms, 1992 was the year the CAVE was born at the University of Illinois at Chicago’s Electronic Visualization Lab; two years later, Netscape (developed at NCSA as Mosaic) had its initial public offering, becoming the first widely used, graphics-based browser.  Author / editor Donna Cox was fortunate to be creating in the thick of it, working in the area of scientific visualization and emergent technology.  Also in that time in Chicago, (art)n (a digital arts media artists’ collective) was involved working with Spielberg  and testing digital medical applications in hospitals as real, applied products.  Author / Editors Ellen Sandor and Janine Fron were also there, helping to create and lead in the digital arts.  Kelly Searsmith rounds out the authorial / editorial team as a humanities scholar working to help shape the future of digital arts media programming in higher education.

In conducting our research on these historical developments, we are recording interviews with pioneering women whose stories extend from the fertile Midwestern art/scientific environment during WWII to our present day digital cultural experiences within the arts, science, and entertainment.  Interviews we have completed are with Martyl Langsdorf (designer of the famous Doomsday Clock), Carolina Cruz-Nera (co-inventor of the CAVE and a leading engineer and education still vital in the field), Brenda Laurel (one of the first women in video gaming and a leader of the independent GRRL gaming movement), Joan Truckenbrod (School of the Chicago Institute of Art Professor, artist, and author of the pioneering book Creative Computer Imagining, 1988), Claudia Hart (a feminist 3D graphics and subversive gaming artist, and Faculty, School of the Art Institute of Chicago), and Maxine Brown (Associate Director of EVL, leading organizer and theorist of the digital arts technologies).  Each woman is placed on a timeline of evolution in arts, technology, feminism, and world history–from a period when no women were mentioned as major contributors in art history books to today, when women play significant leadership roles in major institutions in digital media.  These digital pioneers became drivers as well as adopters of new technologies, and their migratory patterns have shaped much of what we recognize as the new digital media in visual and performative art today.

Emerging digital media and its foundations are of significant academic and historical interest.  Several recent scholarly books expand upon important digital art developments (such as Edward Shanken’s valuable Art and Electronic Media: Phaeton, 2009 and Judy Malloy’s Women, Art & Technology: MIT Press, 2003).  However, they lack the important social and technical connections among digital pioneers in the Midwest (see the eDream Institute’s timeline of contributions here on campus as a foretaste)–especially the stories of the contributions of women.  Our approach, we believe, is unique because we are revealing a little-known synergy between individuals and institutions, global migratory patterns and the impact of pioneering efforts from Midwestern women’s points of view.