The Cultural Computing Group / CCG is led by Guy Garnett. CCG is the legacy of the Cultural Computing Program / CCP (and Lab), which Garnett co-founded in 2005 with Roy Campbell of Computer Science.  CCP was itself the result of informal collaborations between Garnett, Campbell, and others who were associated with the Seedbed Initiative for Transdomain Human Creativity, which was led by Mike Ross (Director of the Krannert Center for the Performing Arts).

In 2009, CCP transferred its lab space to NCSA's Creativity Space from the Siebel Center, formed a research group around Garnett's projects, and became a special partner of the eDream Institute, for which Garnett serves as Associate Director for Research.  CCG is also closely associated with IACAT (Institute for Advanced Computing Applications and Technologies) Creativity and Computing, for which Garnett serves as co-PI (along with Donna Cox, with Mike Ross as PI). 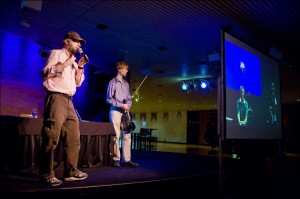 This page is dedicated to the memory of Erich Hauptmann, who served for three years as a valued member of CCG. He went on to work for Digital Domain after graduating from the University of Illinois in 2008. His work in graphics and technology was featured in Percy Jackson and the Olympians: The Lightning Thief (released in February 2010 by Fox 2000 Pictures). Erich passed away in 2010.