Research at eDREAM and IACAT (Creativity and Computing theme) has several long-term goals in keeping with their overall institutional missions to spur innovation in art and science.  Their primary current research is in the following areas:

Most High Performance Computing (HPC) operates in a batch processing mode. For artists, particularly performing artists, there is a need to interact directly and in a timely fashion with the processing to allow sufficient room for intuitive and aesthetic responses to be brought to bear.

The realtime interactive goals can be outlined as follows:

The high-performance goals are in keeping with existing uses of HPC:

The current projects that are helping to drive research in realtime interactive HPC include:

Performing arts ensembles, whether dance or music or theater, rely frequently on precise, repeatable, split-second reactions and responses between multiple performers. Typical computer networks, on the other hand, have latencies on the order of 100s of milliseconds to seconds while their inherent jitter makes prediction all but humanly impossible. New networks are coming soon that will enable performers to interact over continental scale distances with the required low latency and with uniform or very minimal jitter. We are developing systems now to lead the way in such networks to enable distant performers to collaborate both in rehearsal and in performance. 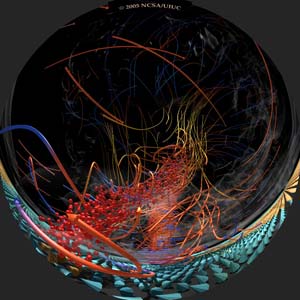 The visual and sonic arts provide a means to enhance and interact with science data and scientific processes that can significantly increase their human impact on the scientists themselves, aiding in the knowledge discovery process, and on the wider public to influence policy and increase education.

Virtual worlds are still in their infancy. They are difficult to create, impossible for non-professionals, and even more difficult to scale to large numbers of users and objects. Our work is creating a framework for virtual world development, mWorlds, that will ultimately be easy for end users to use to develop and support their own virtual worlds. It is highly distributed and highly modular.