In terms of aesthetics, CG character animation has become a victim of its own success.  Twenty years ago, recreating human beings in virtual 3D space was a fantasy, a “Holy Grail” of computer animation.  Today, that fantasy is a reality that surrounds us in films, games, and even TV commercials.   The modeling, animation and rendering of characters as photorealistic human substitutes has become almost commonplace in popular culture.  But, an unintended side effect of this success is that audiences are largely alienated from, not attracted to, these characters.  This seeming paradox is often called the “Uncanny Valley”.

The Uncanny Valley is a consequence of a very basic but incredibly refined human acuity–perceiving honesty, or the lack of it, when we observe people.  The photorealistic characters in many contemporary CG-animated films are not honest.  They pretend to be real humans, but we can feel that they’re not:  their eyes don’t move properly, their movements are slightly too fluid.  We instinctively realize we’re being hoodwinked, and we stop trusting. 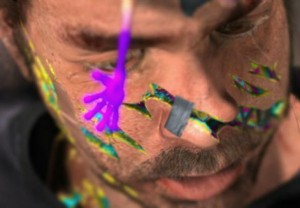 About Chris Landreth
Chris received an MS in Theoretical and Applied Mechanics from the University of Illinois in 1986; but before long, the siren call of Art beckoned.  So in 1989,  Chris studied Computer Animation under Prof. Donna Cox, at the National Center for Supercomputing Applications (NCSA).  This period of time doomed Chris to a lifetime obsession with this field.