New Scientist's CultureLab blog has been running a series of posts under the "When art meets science" banner, "when worlds collaborate."  The series addresses basic questions about this trend:

In the cool interiors of universities and art studios, something is afoot. Artists and scientists are breaking out of their moulds and venturing into each other's territories. Some artists (see above) are doing cutting-edge science, while scientists are making art, and still others are working together to forge something new. What's more, the public can't get enough of the work they produce. But why are these long-separated cultural giants moving closer? And crucially, is anything important emerging? In our "Art meets science" posts, we talk to major players from both worlds, and explore the big challenges facing these collaborations.

I particularly recommend three posts: an interview on the differences between art and science and the possibilities and problems in bringing them together with emeritus Oxford art historian Martin Kemp; an assessment  of the sci-art field by writer and sometime sci-artist Jonathan Keats; and an assessment of digitization as a means of cross-disciplinary communication by SFSU Info Arts Professor Stephen Wilson.

I give some excerpts next that demonstrate why these particular posts are of such value.  They are each focused quite differently.

Martin Kemp explains the deep connection between art and science in this way: "Some aspect of structure is involved in all the deeper dialogues between the arts and sciences. I call this shared quality 'structural intuitions,' referring to the resonances between our mental structures and nature's patterns of organisation. There are examples everywhere, from Galileo's moon drawings to Andy Goldsworthy's sculptures."  Kemp's account echoes complex systems theory, which is increasingly taken in some contemporary circles of philosophy to move in a unified way between accounts of consciousness and materialism and even social organizations and other cultural phenomena.  The Sante Fe Institute is a leading academic organization that explores this theory and its permutations.

Keats' piece gives a clear-eyed view of failures in sci art.  Bad sci art, he writes, is either "infatuated with the aesthetics of technology to the detriment of artistic substance" or "driven by politics" to such a degree that the art is incidental — the focus in the example he gives is on scientific proof rather than a more open sensory experience.  Good art, he reminds us, is "persistently beguiling, is in the asking."  And he does give an example of a sci art project that answers this call (a terrible pun: Cloaca Machine by William Delvoye, pictured). 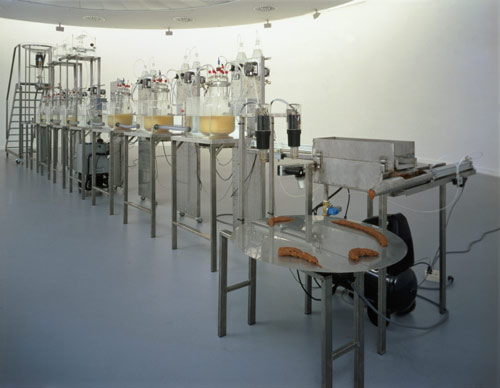 Stephen Wilson notes how digitization has "lowered interdisciplinary barriers" (writing from inside the field, I have to agree this is an incredibly important trend).  The laptop becomes a common instrument played across specializations, with data mutually shared where once disciplinary discourses divided efforts at mutual understanding.  However, he also voices an important concern over the limits of digitization that ought to be considered even as we move forward in fostering "this nascent third culture":

There are aspects of science and art that cannot be digitised; there are always elements of a phenomenon that will be missed. Some biology researchers question the euphoria about bioinformatics and the notion that biology could be ultimately reducible to digital code. Sceptics wonder what phenomena are being ignored because they are not easily digitised. These kinds of concerns make art-science collaborations in biology more complicated than in computer science.

And we may well suppose across other domain areas, from psychology to linguistics to physics.  Not all sci art employs computation as a medium, of course (Keats's discussion of bioarts gives good alternative examples), but it is a major applications area within the field, and certainly the primary applications area for eDream.