eDream hosted a reception on April 15th to celebrate our creative-technical partner AVL's release of Hubble 3D, a film produced by IMAX and Warner Bros. with NASA.  AVL's contribution to the film was two long, continuous space shots that transport viewers faster than the speed of light from Earth's night-sky view of Orion's belt to the Orion Nebula and from the Milky Way to the ancient center of the Universe and back out to the grand Cosmic Web.  AVL collaborated with the Space Science Telescope Institute (project lead: Frank Summers) and the Spitzer Science Center to create these extraordinary views of the cosmos.   Together, the two shots made up over 20% of the film.

At the Hubble 3D Chicago premier, which took place at Navy Pier IMAX Theater, audiences saw a pre-release screening of the film followed by presentations from Frank Summers and Donna Cox (Director of AVL and eDream) on the art of visualization for Hubble 3D.  Audiences learned that digital arts media is a broad field, one that encompasses digital film making as well as advanced scientific visualization and its cinematic treatment for public outreach.  This project incorporated an unusual breadth of expertise in the domain.  During the making of Hubble 3D, an IMAX Space Productions team (including Director Toni Myers; producer Judy Carroll; and Vice President, Technical, Hugh Murray) as well as STScI project lead Frank Summers visited AVL at the NCSA Building several times to collaborate on the shots in development on a 4K stereo display using Virtual Director, the interactive cinematic choreography tool patented by AVL. 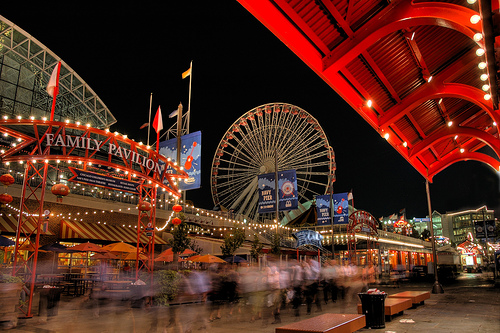 And the work is making an impact.  Hubble 3D IMAX has been receiving glowing reviews from all quarters, especially the long space shots, one of which allows humanity to travel imaginatively through a 3D vision of the Orion Nebula for the first time.  The film also shows views of a 3D model of the Milky Way created by AVL over a ten-year period, visible no where else but in the work of AVL.

So we had much to celebrate!  Joining us were over 130 guests, including University of Illinois Trustees Christopher Kennedy and James Montgomery, Vice Chancellor for Institutional Advancement James Schroeder, Director of NCSA Thom Dunning, Executive Director of NCSA Danny Powell, (art)n Director Ellen Sandor, and many more.